Just like a venereal disease, the Sunnyside Yards deck keeps on coming back.

Have to hand it to the NYC EDC. Like a career boxer, despite taking a whupping in their last trip to the ring (Amazon), they have laced the gloves back up and they’re back with another project that nobody in Western Queens wants to see happen – decking over the Sunnyside Yards to facilitate the dreams of avarice enjoyed by their sponsors in the Real Estate Industrial Complex. As you may have noticed, Long Island City doesn’t exactly need “fuel” to spur economic development hereabouts, as “growth” is occurring so rapidly and uncontrollably at the moment that one might describe it as a rapidly mestastasizing cancer instead.

To this end, which would be the construction of a residential Death Star on Northern Blvd., the EDC has announced that the second of their Potemkin Village Dog and Pony Shows will occur on the 26th of March. It’s a public meeting, so come with?

This is the second soirée for EDC. The first one was last year at LaGuardia Comunity College. They arranged for a significant number of the trade union members to show up, which created an intimidating environment for the actual community to voice up against the idea. Also, they seemingly invited the cast of extras who have been out of work since the Sopranos went off the air. Who wasn’t in the room? The bankers and insurance brokers who will leverage the City’s debt associated with this project, which will be tens (if not hundreds) of billions of your tax dollars, nor the Real Estate Titans, or the construction mega companies who will construct the deck like AECOM, Granite, or Skanska (who will carry their profits out of state and off of American soil).

The people working for EDC aren’t bad people by any means, incidentally. I would just point out that their track record sucks. Do you see a Ferris Wheel rising over Staten Island? Spend much time at the Brookyn Army Terminal, do you? Do you think Battery Park City just rocks? If you were for Amazon or against it, you can blame EDC for that one too.

Remember, this deck of theirs will rise a minimum of five stories from the current street elevations surrounding it. The top of the deck will become “ground zero” for dozens of luxury residential towers that will host about fifty thousand apartments. No new hospitals, police, or FDNY facilities are part of this plan. Will they dangle a new park in front of you like some cheap trollop as an enticement? Will they promise you local jobs (how many people in Western Queens are qualified to build a deck over a rail yard)? Will you fall for the bait and switch? EDC anticipates that rent in the neighborhoods surrounding the project would go up, rather than down, as they bring the new inventory on board. How does that work? Economic development doesn’t obey the law of supply and demand?

Send them back to Manhattan, and back to their drawing boards. 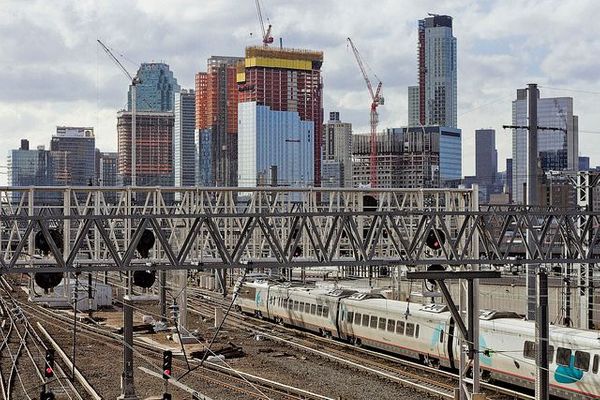 Find the Sunnyside Yard Feasibility study here.SUNNYSIDE YARD FEASIBILITY STUDY – HIGHLIGHTS   PLANNING PRINCIPLE P116 “An overbuild development at Sunnyside Yard would be a long-term project that would become a